Experiencing some exotic airlines in Africa

With my recent trip, I had the chance to fly with a few African airlines, such as, British Airways (Operated by COMAIR), South Africa Airways and Proflight Zambia. I was travelling from Johannesburg to Livingstone on BA’s old B737-300, from Livingstone to Lusaka on Proflight Zambia’s super tiny, private jet like aircraft, and from Livingstone to Johannesburg on SA’s B737-800. I hope my experience could somehow show you what it is like and what to expect in the south region of Africa (like most people in points and miles know by now what is like flying ex-Cairo, in North Africa). 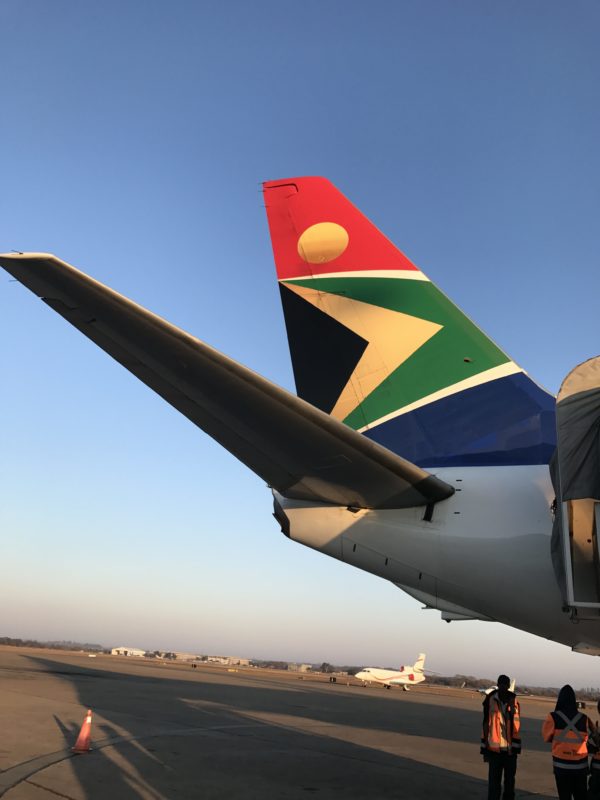 To my surprise, compared to many under-development countries (including mainland China), The three airports I went to, no matter how small they are, they all have different lounge offerings.

I visited at the SLOW lounge for my BA flight as well as the SHONGOLOLO Lounge at Johannesburg for my Cathay flight. Interestingly, even though BA has its Galleries Lounge at JNB, but it only opens from 15:00 till 21:00 for its long-haul flights to the UK I believe. If you have to catch a COMAIR operated flight departing around the noon, you will have access to visit the SLOW lounge. It also receives premium guests Air France/KLM. I liked the decor of this lounge, modern but with Africa accent to it. The food offering was okay for breakfast, and I did not eat anything after standing in transit line and security like for two hours. I just worked a bit in a quiet corner and had some water.

For the SHONGOLOLO lounge, it is not as nice as the SLOW lounge, but it is still interesting regarding how the layout of the space designed. It did not waste any space, with high back chairs/sofa placed across the lounge. The food and drink offering was decent too. I had some snacks before boarding my flight to Hong Kong. The shower room was very spacious, though I could use more amenities, like a pair of slipper:)

I did not go to the lounge at this airport, but I saw there is a priory pass contracted lounge, which anyone with a priority pass can visit. Since I only have my Amex Business Platinum card now, I never bother even to activate my priority pass, as I do not think I will ever pay for entering a lounge, unless it is LH first class lounge or Air France first class lounge. 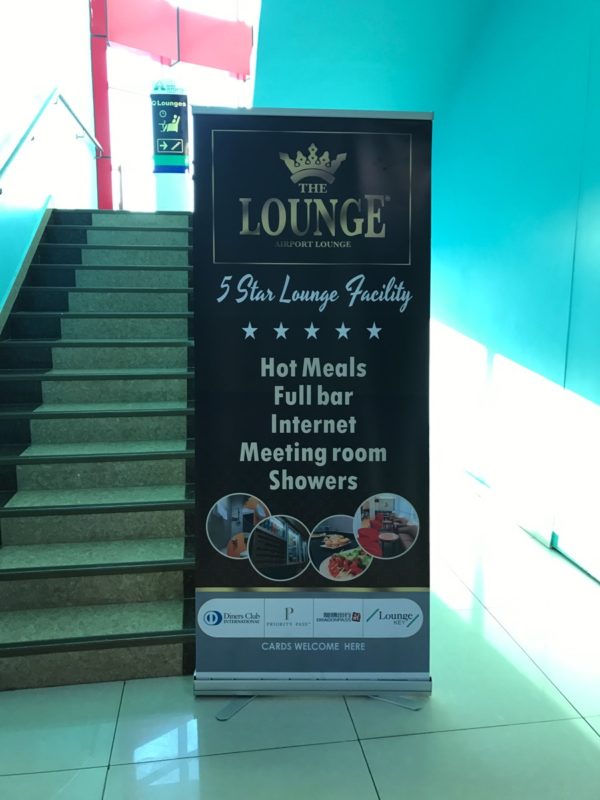 South Africa Airways(Star Alliance), and Kenya Airways (Skyteam) both operate lounges at this airport. Lusaka airport’s new terminal is also under construction, so I imagine they will have even better lounges once the new airport opens. I visited the South Africa Airway’s lounge as star alliance gold member. It has very distinct Africa decoration, which felt bit dark and nostalgia in the early morning. Since we are the first flight out of Lusaka in the morning, the lounge staff were not even all arrived for work yet. There was only one lady was setting up the food counters. Maybe it is because her coworkers did not show up to work, she looked quite unhappy. I was able to use the lounge wifi to place a few Skype calls and had a cup of tea before heading over to boarding gate.

I was able to use 9000 Avios to redeem the BA flight from JNB-LVI, but I had to pay cash for second and the third flights. 9000 Avios will get you in club cabin (business class), but if you can find economy space, it will only set you back for 4500 Avios, an excellent way to use your Avios.

The BA flight was routine, and I arrived JNB from London on their A380 First Class, so I slept through this short flight and ignored all food and drink services. I will write my First Class review later. 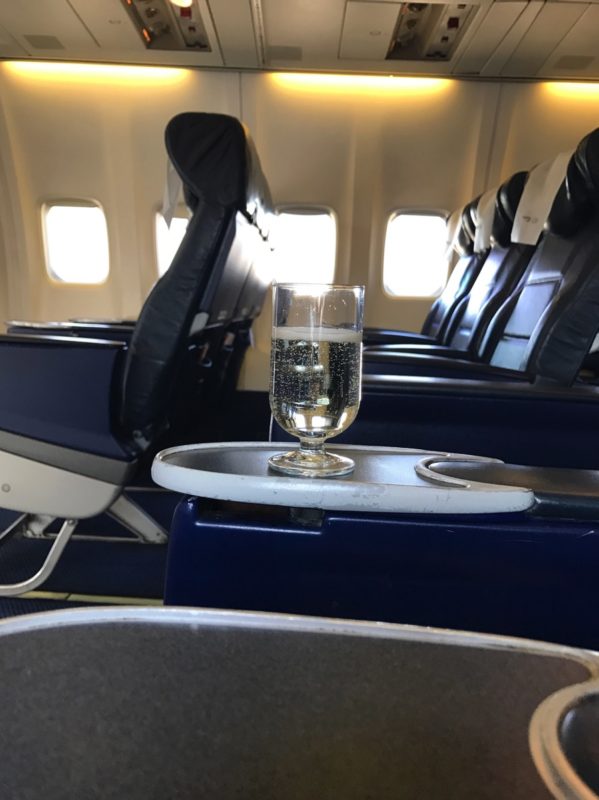 The second regional flight was from Livingstone to Lusaka. The aircraft is tiny, and it was a British Jetstream 41, and we had a full load. I think this was one of the most uncomfortable flight I have ever on. If someone has claustrophobia, I do not believe that she/he can survive this journey. Not to be exaggerating, I cannot even reach into my jacket’s pocket without rotating my upper body 90 degrees. Moreover, I felt so bad after we landed, because I was in this confined area, and I can not move any parts of my body. Luckily it was only an hour flight, but it felt worse than a 10-hour flight in Economy. Another fun thing about this airline was, all our checked bags were unloaded in a cart and pushed to the terminal as a grocery shopping cart by the ground staff. I cannot recall when was last time I saw this. Although this aircraft was super tiny, we had drink services(water and juice) and food offerings(a little muffin). 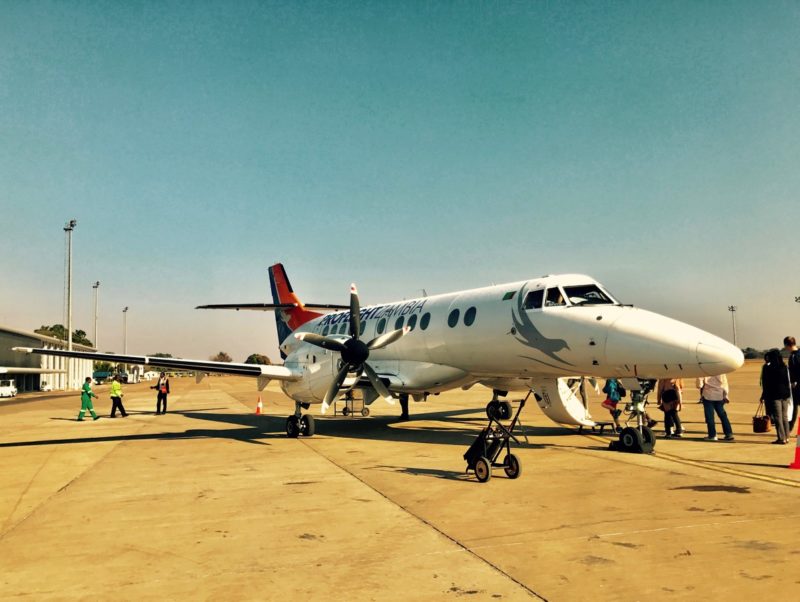 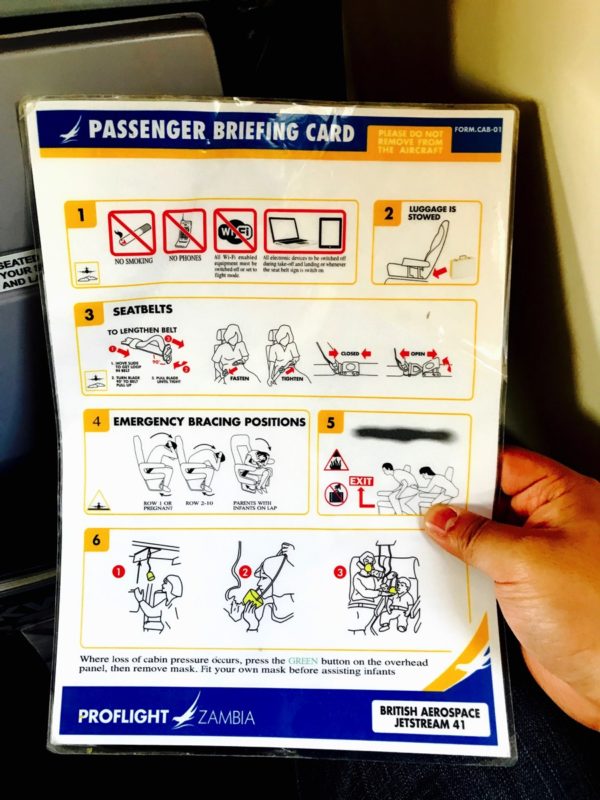 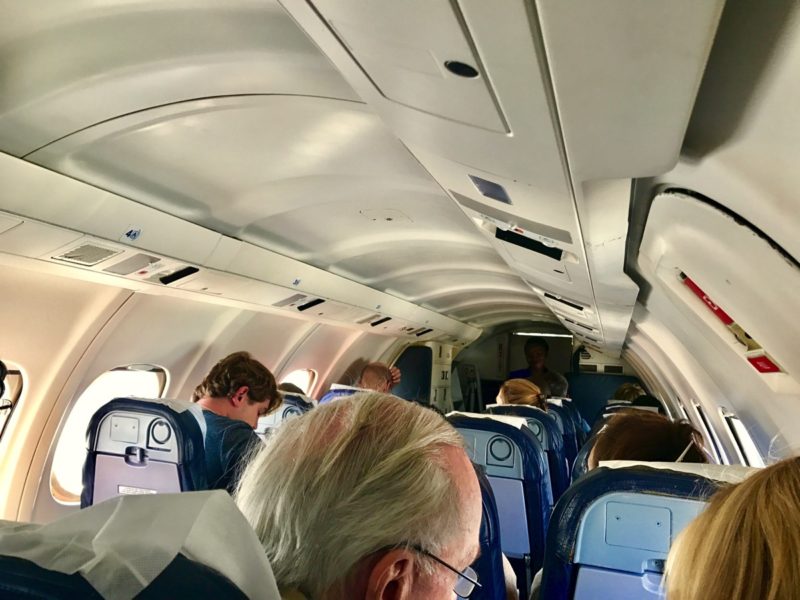 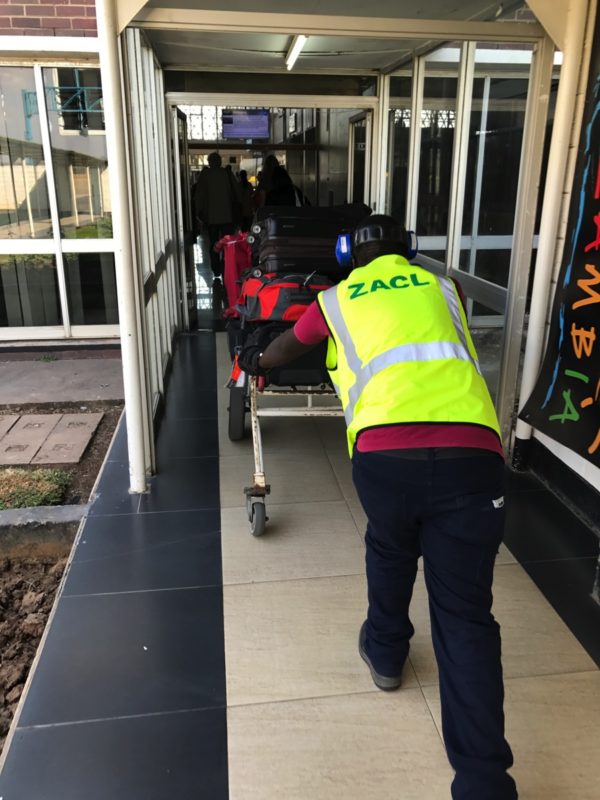 Lastly, the SA flight had a bit of drama. It was my first time flying this airline, despite it is a star alliance partner. The aircraft is a 737-800, and the interior does not look like a modern aircraft at all. The seats seem taken off from a retiring airplane. Knowingly the SA is almost out of cash flow and on the verge of bankruptcy, so I guess my assumption has some validities. The dated interior did not bother me that much, but the way this airline handles overhead bin did. Once the cabin door was closed, I noticed that the overhead bins remained open. Then I saw some passengers stood up and closed some bins, so I followed their action as a concerned passenger. “NO!” a rude and cold voice came from behind, and a faceless FA showed up and opened the bin again without any further explanation to me as if I was not worthy to converse. I guessed they probably need to spray the overhead bin before departure. So I settled down and relieved for the moment. 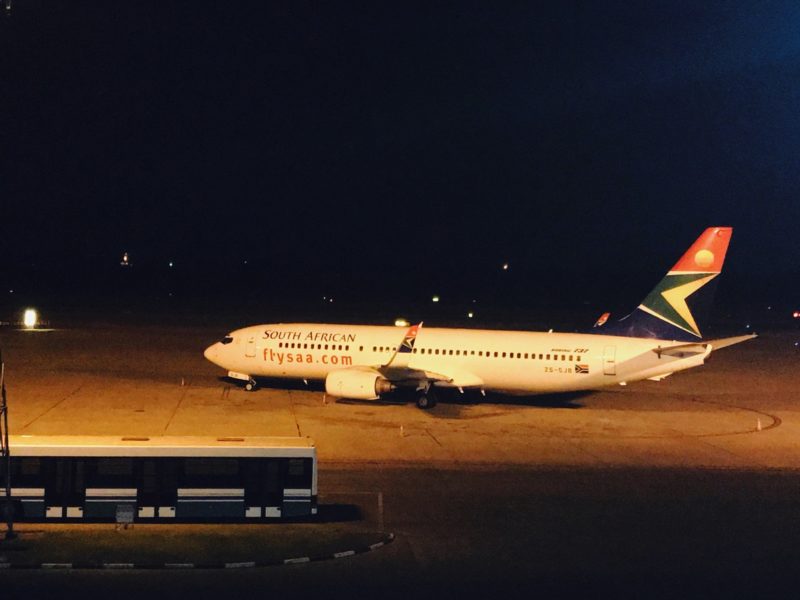 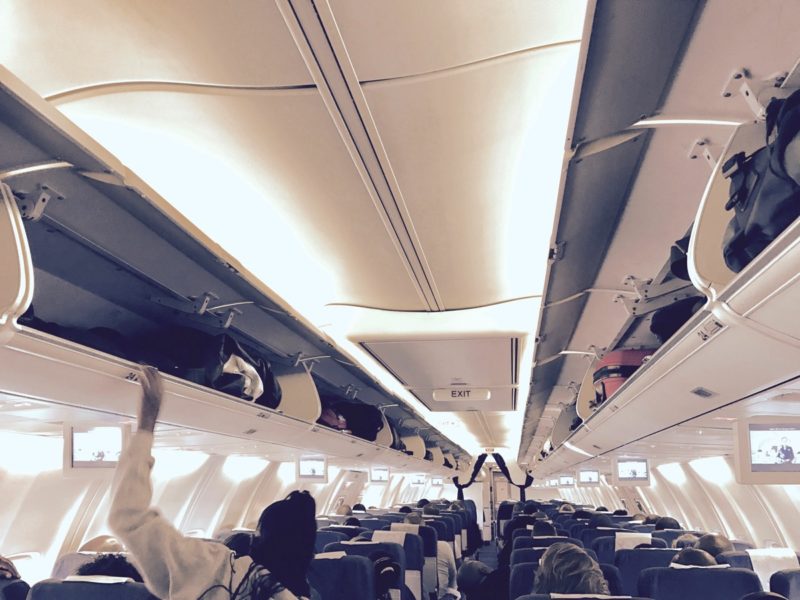 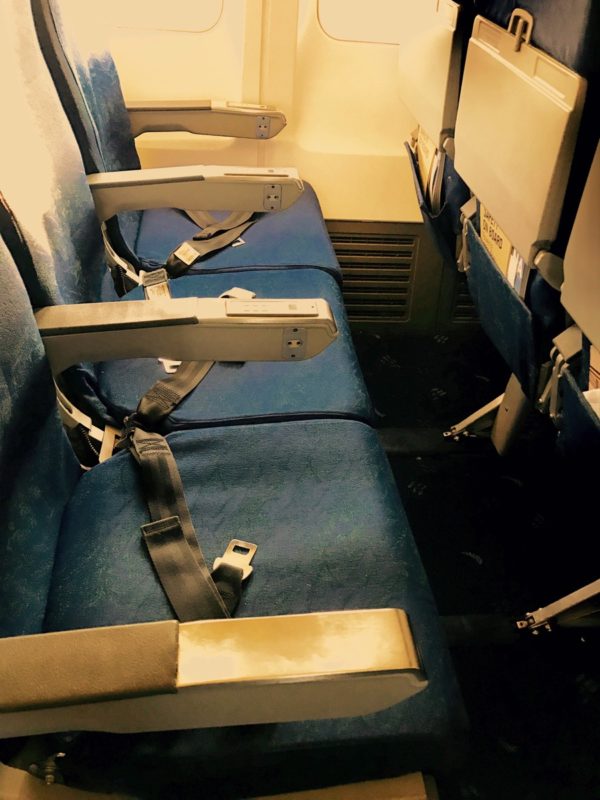 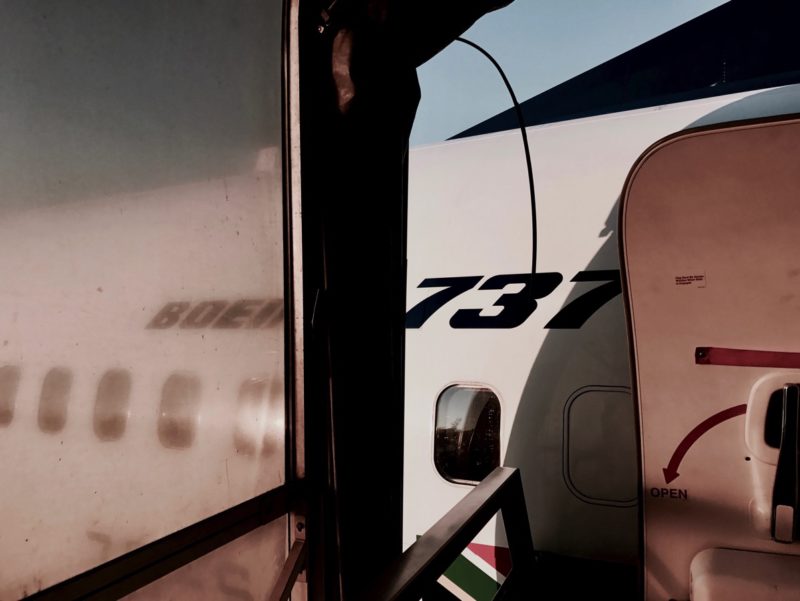 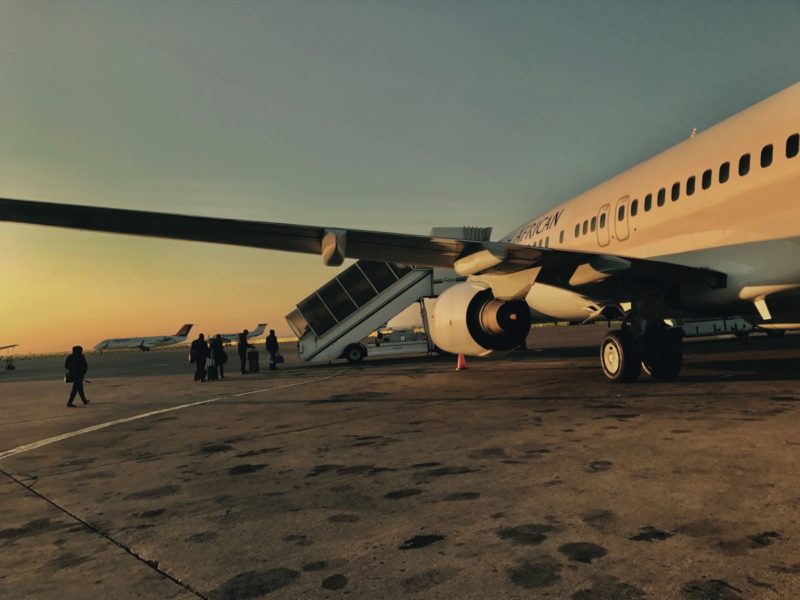 A few minutes later, my adrenalin level started to rise, because the aircraft STARTED TAXING, and they still did not close any bins! What happens if a bag falls off? Some passengers again stood up and closed the bin, and the same faceless FA came over to stop the actions and re-opened them. This time, a western passenger confronted the FA and inquired the reason for keeping these bins open. The FA finally explained that they need to spray the luggage. Later the same FA finally started spraying the overhead bin, and another FA was following her to close the overhead bins. I did not feel safe about this situation and wondered whose liability would be if any unpleasant incidents happened because of this. This flight had decent breakfast services, and I found SA offer a good Y meal. 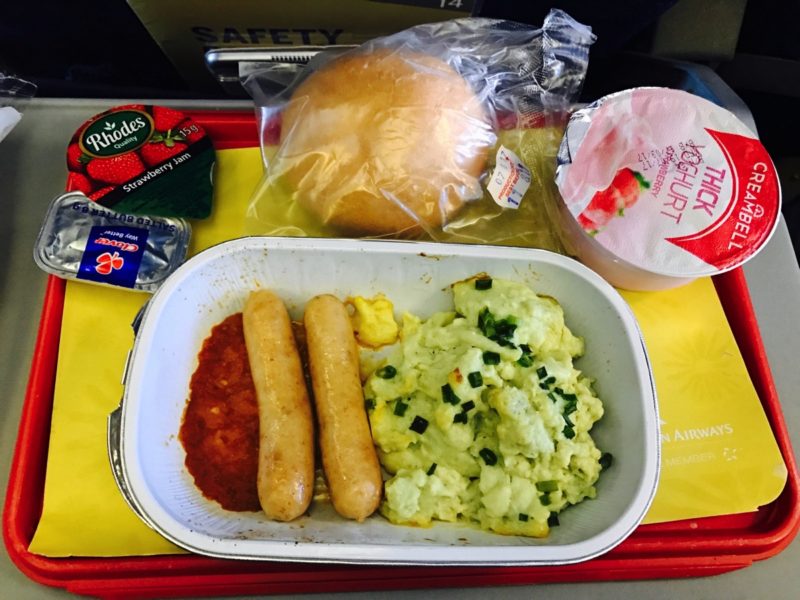 I believe I have had some minor cultural shock taking these flights, but in general these airports and flights have a very decent infrastructure and the services provided are better than airports in South America that I have visited. I would not be too worried to fly with regional Africa flights. One last trick, you can redeem using Etihad Guest miles for South Africa Airways flight starting from 7700 miles one way in Economy. Maybe not as good as Avios, but SA has a robust network in Africa, and it is still the cheapest way to redeem SA flights than any other Star Alliance partners (as per awardace.com). You can transfer your American Express Membership Rewards points to Etihad Guest at the ration of 1:0.75 and make sure to leave out plenty of time for the transfer process to complete, as well as 15 days before your desired departure time.