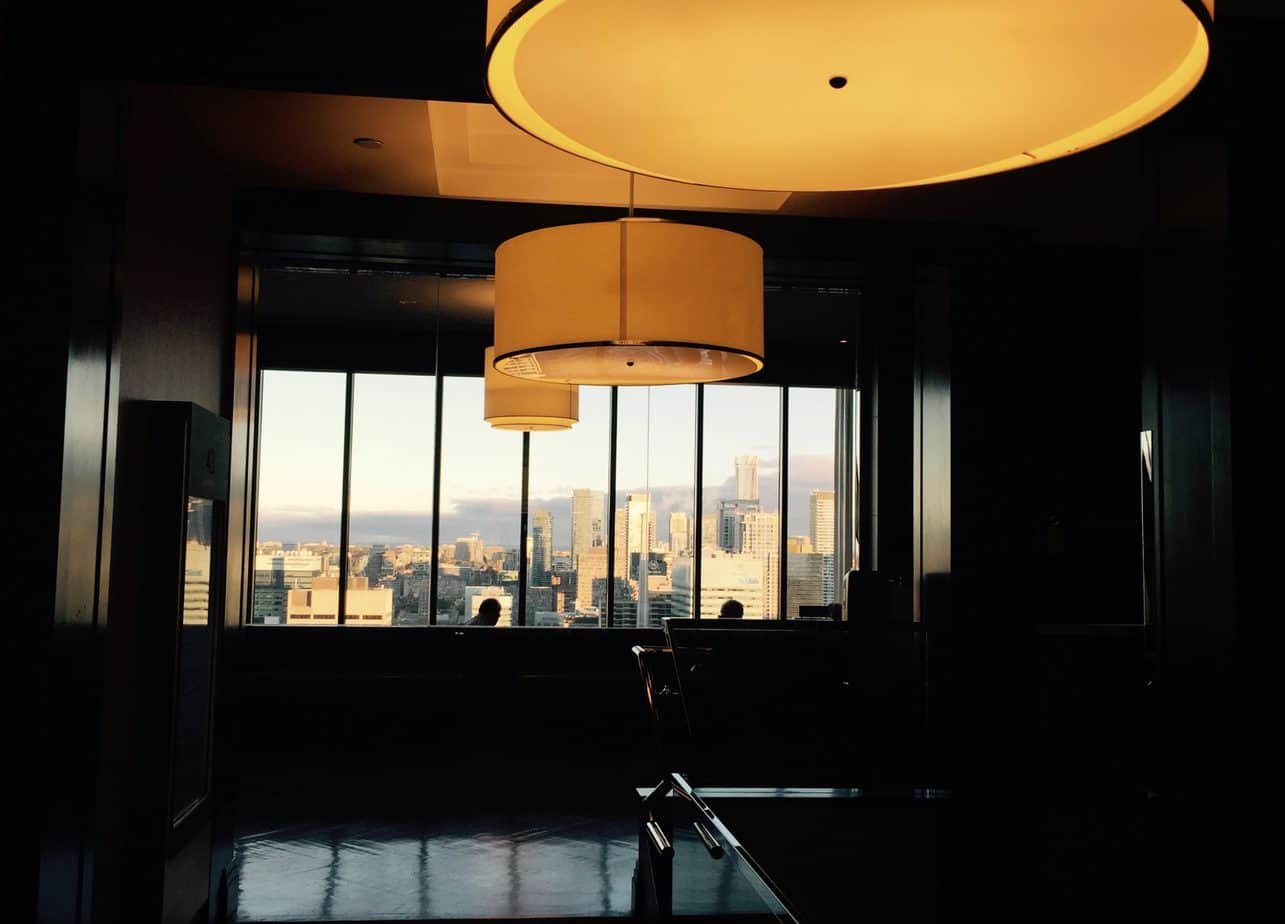 Before starting this post, I would like to clarify one thing; this unpleasant trip may attribute from the busy season during my stay. I had a great stay on this same property last October during the second Canadian Points University. I am also grateful the hotel club coordinator Miss Wada tried her best to accommodate my needs and took the initiatives to help me resolve the issues, same as the front office on duty manager Elliott. Now those things are out of the way, let’s talk about this stay. The purpose of this trip was to see Mayday’s concert at Air Canada Centre. Based on my previous experience that I had met a very famous celebrate from Taiwan in an affordable hotel in Bangkok (long before I started the points and miles hobby), I had the feeling hat Mayday may also stay in this property, because it has a better value than four season or other up-scale ones in Toronto. My intuition served me well, though they turned out to be quite offensive and arrogant, such as drinking till late night before the concert and treating their fans poorly.

I originally booked one night for the stay  because I was only planning to go to the concert that night. After I checked the flight tickets, I worried about the delay, because I could only find availability on Aeroplan around 16:00. To be safe, I decided to come a day earlier and could also catch up with some friends in Toronto. These two reservations were made quite some time apart, and I made two Best Rate Guarantee (BRG) claims for these two bookings and got them approved.

Before travelling to Toronto, I inquired with the Miss Wada to see if there would be a suite upgrade available for me, then realized my suite award night certificate was no longer attached to my first-night reservation due to my BRG claim. Since it was close to my check-in date (less than five days), I just explained the situation to Miss Wada. Unfortunately, the hotel was sold out on my first night. I also told Miss Wada how I had to make two reservations and I would like them separate, so I could potentially get a suite upgrade for my second night.

When I checked in for my first night on Saturday, the front desk saw my reservation for one night only and it seemed that Miss Wada complied with my request and did not link my two reservations. I got a club room.

Oh boy, the Sheraton Toronto downtown hotel was sold out this night, including their club rooms! The lounge was PACKED! I was unable to find a seat because they also took table reservation for club lounge. I saw an empty table that had a reserved sign on it. I asked one server, and he told me he did not take the reservation and had no idea what the deal was. Luckily, after standing in the club lounge for about 20 minutes, I was able to find a seat.  I had some satay chicken skewers and some cheese balls, which were average. I missed the Calgary Eau Claire Sheraton’s lounge food.

After the short stay at the club lounge, I headed down to the lobby and met up with my friends. We were a group of three, so we could not access the lounge anymore, but we settled at the hotel restaurant BnB, as we had a good memory there from last October. After few drinks, we noticed the band, Mayday, was also at the bar. After midnight, I went back to my room and started to notice a combination of vibration and noise. Every few minutes, could feel my room vibrating on one side of the wall.

I called the guest services and told them what I observed and recorded. In the beginning, the guest services stated that they weren’t sure of what was going on but would send up an engineer to check the situation. 15 minutes later, no one came up. So I started my own investigation. I looked outside of the window, and everything seemed fine. Then I wandered around the room and located the culprit. My room was next to an array of six service elevator.

My first reaction was, I understand you sold out your rooms, but why did you give me a room that is so noisy in the middle of the night. It was my 75th SPG night of this year. I was looking forward to it because I was able to unlock more benefits from my favourite hotel loyalty program.

Since no engineer showed up, I called the guest services again. It was midnight, and there was only one agent on duty. After a few moments of waiting, I expressed that my room was next to the service elevators and it was impossible to sleep in the noise. I was still very courteous at this point, even though it had been a long day for me, and I was exhausted. The guest services said that they would arrange another room for me and send up a bellman to help me with the luggage. It was another 20 minutes wait, and the clock showed 1:45 AM.

The bellman finally showed up, without any apologetic expression, but rather annoyed. When we were in the elevator, I was told that I was being moved to the third floor. When we arrived, the bellman used his keycard and tried to open room #358. The lock did not open, and then we heard some coughing from the inside of the room. “There’s someone in the room! Are you sure this is my room?” I asked the bellman.  He was surprised too and spoke on his walkie-talkie. After a few moments, he was told my room was supposed to be 356. So we walked back two rooms. Finally, we were able to unlock the door, and thankfully, nobody was sleeping in there.

I could still hear the TV noise from the next door because it was a connected room. However, comparing to the horrendous elevator vibration and noise, this was nothing. Unfortunately, though, this room had its own problem. I was not sure it was because the thermostat could only control the air conditioner and the heater had to be set separately. I caught a cold the next morning after all.

Throughout this experience, I spoke to the Twitter team twice, and they were very sympathetic and supportive. They told me the manager-on-duty would contact me to resolve this issue. Unfortunately, I only spoke to the front desk officer on the phone once before my room was switched. To be honest, for all the FOMs I have dealt with, this gentleman was not the most friendly

The next day, I went to the front desk, to check-in my two other rooms for Sunday night. I was told that the room 356 is already extended and checked in and they also offered me a suite for my second room. For context, my reservation for the following night included one King bedroom and two Queen bedroom. Room 356 was a King size room, and the suite was also a King size room.

I told the receptionist about what happened last night and informed her that I was supposed to speak to the on-duty manager. She then called the on-duty manager Mr. Elliott over. I updated him about the situation again and told him that room 356 was a temporary solution. I needed a King size room and a double Queen size room as per my reservation. I also informed him about what I heard from twitter team. He was able to correct the room situation, which I got a double Queen size room and a King size suite. However, there was no mention of the issue I encountered the previous night. A few days later, I received 7000 starpoints goodwill points from the hotel, which was not expected. For example, when I had issues with Montreal Le Meridien or Honolulu Sheraton Princess Kaiulani, the front office manager or the on-duty manager would come to apologize to me personally and offer the points as a goodwill gesture. As much as I love Starpoints, It was never my first objective when I talk to the managers. For the most time, as long the issue is not critical and solved within a reasonable timeframe, I would tell the managers that I do not need the compensation as it is not a big deal to me. I felt like being beaten by some rich pricks (such as Mr. Robot season 1) and thrown $100 bills on my face.

I am still not satisfied with why I was given that room in the first place. In my SPG stay profile, I never selected the option of “close to the elevator” and always had “high floor” option checked.

Upon receiving my electronic folio, I realized that I was overcharged by $10+ dollars. I inquired with Miss Wada, and she was also confused. I had to send the hotel my BRG claim approval emails few times, and luckily it was sorted out, though the hotel thought they did me a favour and blamed the BRG team cancelled the wrong reservation, which resulted in a different rate. However, the rate cancelled was 30 dollars more than the price I stayed.

I waited to finish this article after the billing problem was solved. It has been 15 days since I started this post, so other hotels have overcame my disappointments at the moment.

To be fair, Toronto Sheraton Downtown hotel has great front-line employees, such as Miss Wada and Mr. Elliott. However, I think the middle tier and higher management team need to up their game, as their attitude was simply disappointing.

I would still stay at this hotel again, given the value and the location in the city. However, I will make sure to leave a note on my reservation saying that “ I do not want a room next to or close to an elevator.”