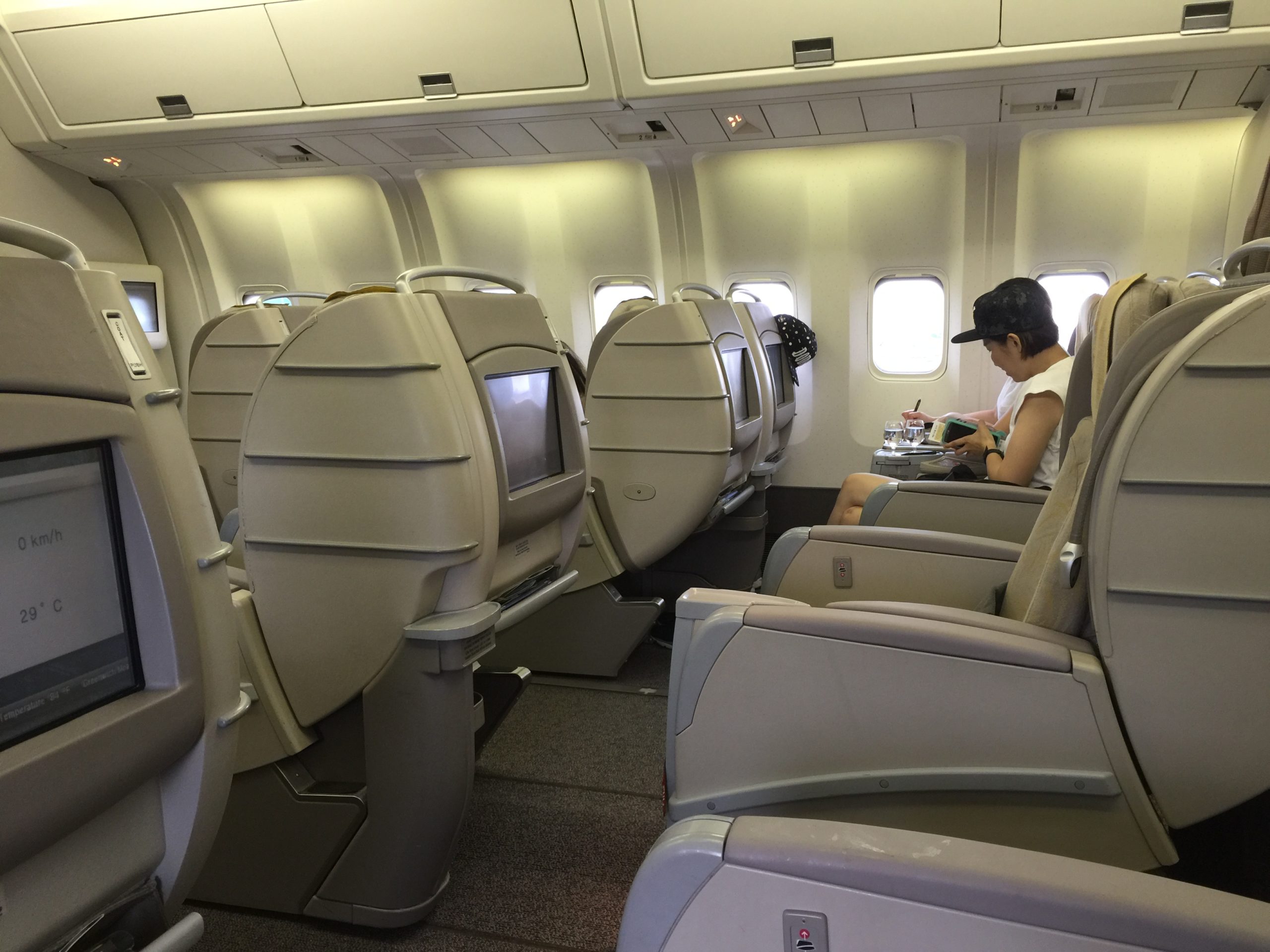 Today we will review the flights on Asiana Business Class; I would not usually redeem miles for Asiana’s flight because it imposes hefty surcharges on Aeroplan. However, in this case, I was unable to find a better schedule to go to Beijing from Taipei. I also really wanted to visit an old friend in Seoul. So I paid additional 200 some dollars on top of $330 I paid for my round the world ticket. I still think it was fair and I have extracted the best value of my miles too.

Since these two flights were two hours each and it has a very similar business product, so I will just write one single review for both trips. The A333 aircraft is 2-2-2 layout whereas the 763 is the 2-1-2 layout. This 2-1-2 seems very popular for some of 767 aircraft. The 763 looks quite dated compared to the 333, where the 333 seat has more feature and can allow you to lie down, even though it is an angled seat.

One thing I liked about these older business products was the handle on the back of each seat, it is convenient when you need to get up or back to your seat with some cables, electronics spreading around your place or when you encountered turbulence, but you were happened to walking through the aisle.

I also noticed a “Design Flaw” was on their Airbus 330-300, it has this weird rectangular thing under the seat rest. As I was looking for the USB port to top up my iPhone’s battery, so I touched the hidden part of this little thing, and I realized the USB port is there! Then I spent a few minutes trying to plug my charging cable into this USB port. I have to say; this is by far, the most difficult USB port I have ever used in my LIFE! USB stands for a universal serial bus, and I do not see anything UNIVERSAL in this scenario.

The food and drink services were okay on board, but nothing special. The FA was very attentive but not as friendly as Eva’s FAs. The In-flight entertainment system (IFE) does not have a vast movie library, but it has the newest movies.

Overall, I guess the long-haul flights from Asiana would be better experience than the short haul regional flight, otherwise I cannot understand how they made it to five star with Skytrax. Maybe they paid a lot of consultant fee to Skytrax?

Even though the flights I had with Asiana were mediocre, thus I have not much to say, but I think it worthwhile to talk about the lounges in Taipei and Seoul.

While I was waiting for TPE-ICN flight, I noticed Singapore Airline has a lounge for business/first class passengers in Taipei Taoyuan International Airport. As a Star Alliance Gold member, as well as the business class passenger, I am also allowed to use this lounge. Based on the previous experiences, the Eva Air’s lounge has typically quite a lot passengers at this time, so I entered Singapore’s Krisflyer lounge. As I walked into the lounge, there were only THREE people in the entire lounge, and I also asked to take a shower in the lounge. The amenities in the shower room is pretty good comparing to some of the other lounges.

The food provided in the lounge was amazing according to my asian taste. I really enjoyed to try out the various of food provided in this lounge, and it even felt better comparing to some restaurants in Ottawa’s Chinatown. It also has various selection of the alcohol and delicious desert. This is the only lounge I felt like to take photos and report about it for a very long time. The last time was few years ago when I was in Sao Paulo’s Star Alliance lounge and the IST’s TK CIP lounge.

In comparison, the Asiana Business lounge in ICN was so poor; it is even worse than some other lounges that I frequently visit, such as YYZ/YVR’s Maple Leaf Lounge, PEK/PVG’s Air China Business Class lounge. The food was terrible, the selection was weak, and the lounge was very crowded. It reminds me of United Club for real. The only difference between OZ lounge and UA lounge was a lady doing Korean BBQ in the lounge, with no smile of course. So the only thing I had in this lounge was a glass of Korean liquor and some nuts and corn chips.

Given the amount of surcharge, you need to pay to fly with OZ using Aeroplan miles. I do not think I will ever fly with them with my Aeroplan miles. At the same time, I am very looking forward to visiting Taiwan Taoyuan International airport.