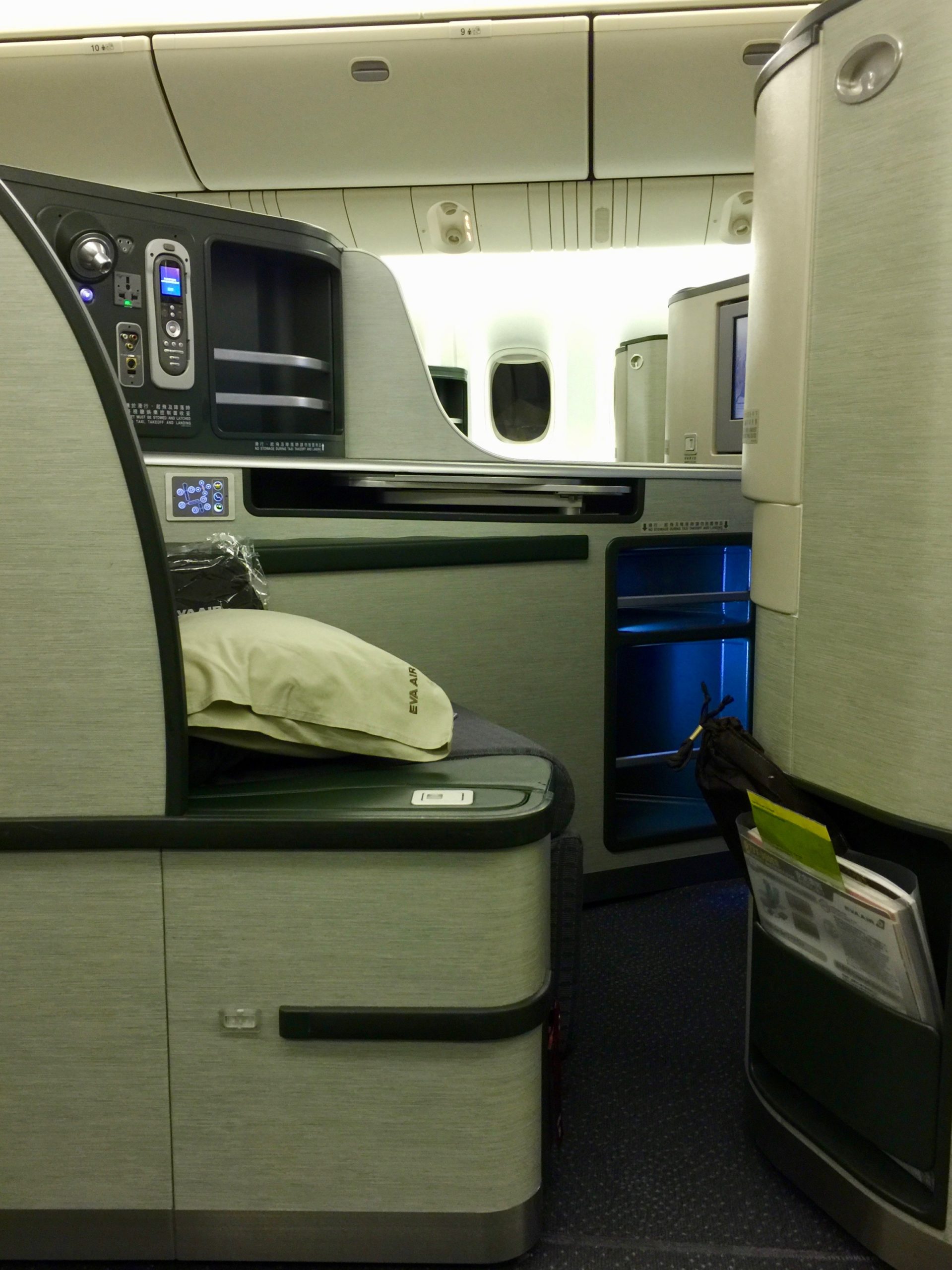 Eva Air is now the 8th Skytrax five-star airline all over the world, and the others include Cathay Pacific, Singapore Airline, All Nippon Airline, Asiana Airline, Garuda Indonesia, Qatar Airways and Hainan Airlines. Upon achieving the rating, they have released a promo video about this achievement. To begin, it has been a few days since I took this flight, and I wanted to review this awesome experience sooner.

As many in the travelling blog world, I have always been skeptical about Skytrax and its criteria for ranking the airlines. It is foremost an airline consultant agency, which makes a living by helping the airlines to improve their services. I had some conversations with Air China’s executives about Skytrax and its CEO and based on my observations and experiences. I would say that the ranking does not mean shit to myself. However, it  provides a quick overview in different airlines for ordinary consumer. (Ask Skytrax, how many free first class and business class tickets they must when evaluating an airline, or when they evaluating other airlines but need to position themselves, and the correspondences between airline’s star ranking and not providing the required tickets.)

I, however, congratulate Eva Air’s achievement, and I think they deserve it. As one of only two Mandarin speaking airlines, Eva Air is way ahead of it is opponent, Hainan Airline. I have to point it out, that I do not know how much did Hainan spent to receive their five-star, but the service and experiences are still far apart from Eva. Though better than ANY mainland Chinese airline, and it is another story to write about Before my review, I want to say that Eva Air is now the no.1 airline in my ranking. The only downside is that I do not live in Taiwan, so I won’t have much chance to fly with them. Now the politic tension between mainland China and Taiwan has been raised ever since the new administration been elected in Taiwan. I hope that they will not discontinue the flights between mainland and Taiwan.

Enough warming up, lets’ get down to the business. Eva Air has an unfavourable time slot at Toronto Pearson International Airport (YYZ), which departs around 1:45 AM, so all the premium cabin passengers have to use YYZ terminal 1’s Premium Plaza Lounge. It is also bad for Star Alliance Gold passenger, who will be kicked out from Air Canada’s Maple Leaf lounge around 00:00. I am not sure if Eva Air would distribute the invitation card to that member with gold status but travelling in economy class. The Premium Plaza lounge in this terminal is also very cramped and has an unfavourable vibe as my personal preference. So as the result, I just grabbed a soda and sat in Tim Hortons for about an hour waiting to embark.

The preparation of boarding took such a long time, I went to line up at the boarding zone 1 lane, and I think I waited at least 30 minutes before I was on board. It felt quite disorganized, but mainly due to the extra time required for passengers required special assistance. Fortunately, the wheelchair queue was shorter than last time I took this flight.

I was the first to board Royal Lauren Class, and a flight attendant escorted me to my seat with pleasure. She even offered to help me to put my bag up to the overhead bin, and I, of course, declined her offer and thanked her. After I settled down, she returned to the gate and started to help others. I was  seated in 9K, which was the second row of the smaller business cabin on this B777-300. A moment later, another flight attendant came over and provided me with the amenity kit (greener Rimowa kit, due to the Taiwanese election) and pyjama. A pre-flight drink was offered, which were only the selection between the orange juice and water, and I selected the water. I remember last time they provided sparkling wine too.

After the completion of the boarding, I received the food menu for this flight, which came with the separate drink and food menu, since I have already pre-ordered my food online, which is the lobster dish. The FA only took the drink order from me. When I was browsing through the menu, I quickly noticed something, this flight also has a new featured red wine, and they printed a single page to highlight this wine. It is something similar Hainan Airline did back in April when I was on the LAX – CSX flight. The irony is the design quality between these two pages. It is a perfect example, why I thought the Eva is way better than Hainan.

Moreover, I noticed that the design of the entire menu set was lovely and elegant. It almost felt like holding a menu from a high-end restaurant or invitation card that you would usually receive for a high-profile reception. I will talk about the design of this list later.

After our flight took off, the FA started to serve the dinner. Even though it was already midnight, I intentionally refrained myself to eat much during the meal. I felt sorry for my friends who live in Toronto because I have only been meeting them before my international flights. I always suggested to go for light meals, so I can still have space on board I am sure they had to find food at night, and luckily they live in Toronto.

The FA served me a light appetizer, the main course and an array of the deserts. According to the menu, the ex-TPE flight has more selections than ex-YYZ. I hope that Eva can strengthen the relationship with the YYZ catering company:) The lobster was a bit overcooked, but it was quite tasty. I also had a glass of champagne and a glass of white wine. The champagne was not good as Drappier offered on Air Canada, but the wine was quite delicious. On a side note, the tablecloth is a piece of silk, and nicely designed. I wanted to take it with me so I can use it at home.

After the food service, one of the FA offered me a turn-down service. I surprised about this service because it was not available last time I was on this flight (Nov 2014). It seems they started the turn-down service from this year in March, and the menu was re-designed last May.

I had a really good sleep on this flight, around 8-9 hours for this 15 hour flight. The bed was very comfortable, and I had enough leg and feet space for my full postpartum body. I worked for a few hours, and the breakfast was offered, which tasted pretty good comparing to the late-night dinner.

The In-flight entertainment system has an extensive library of movies and TV shows. Unfortunately, I have watched all the recent movies that are normally available to the airlines. So I spent all my leisure time on board reading various of newspapers.

Overall, I think I am very impressed the experiences I had on this flight. Whenever I see an FA on board, they would smile to you and ready for your request. When I said every time, it means anytime and any FA on this flight. I have never experienced such friendly services before. It was the first time. Maybe I was lucky or had a friendly bunch of crew members. They are also very polite, which is very rare in the Mandarin-speaking world. I would give all other Mandarin-speaking Airline one star if Eva only gets five stars from Skytrax (Hainan can get three).

The food and drink were okay, but the design of the menu, the china tableware, and the tablecloth are extraordinary. If you care about design, I am sure you will understand how I feel. I would never expect to have the best food in the air, but the excellent presentation can help along the way. I have learned that a Taiwanese designer, Qingyang Xiao created all the new designs. I think he certainly did an excellent job for Eva Air.

Last but not least, I enjoyed this flight, and I wish I can fly with them more often. It is also the first long-haul flight for my second round the world award flight. I will fly with Asiana’s short-haul, ANA’s short and long-haul, Singapore Air and Turkish Air’s long haul. So I will write more about these airlines later on. After this mini-round the world trip, I will experience five different Skytrax five-star airlines, and I look forward to all of them.