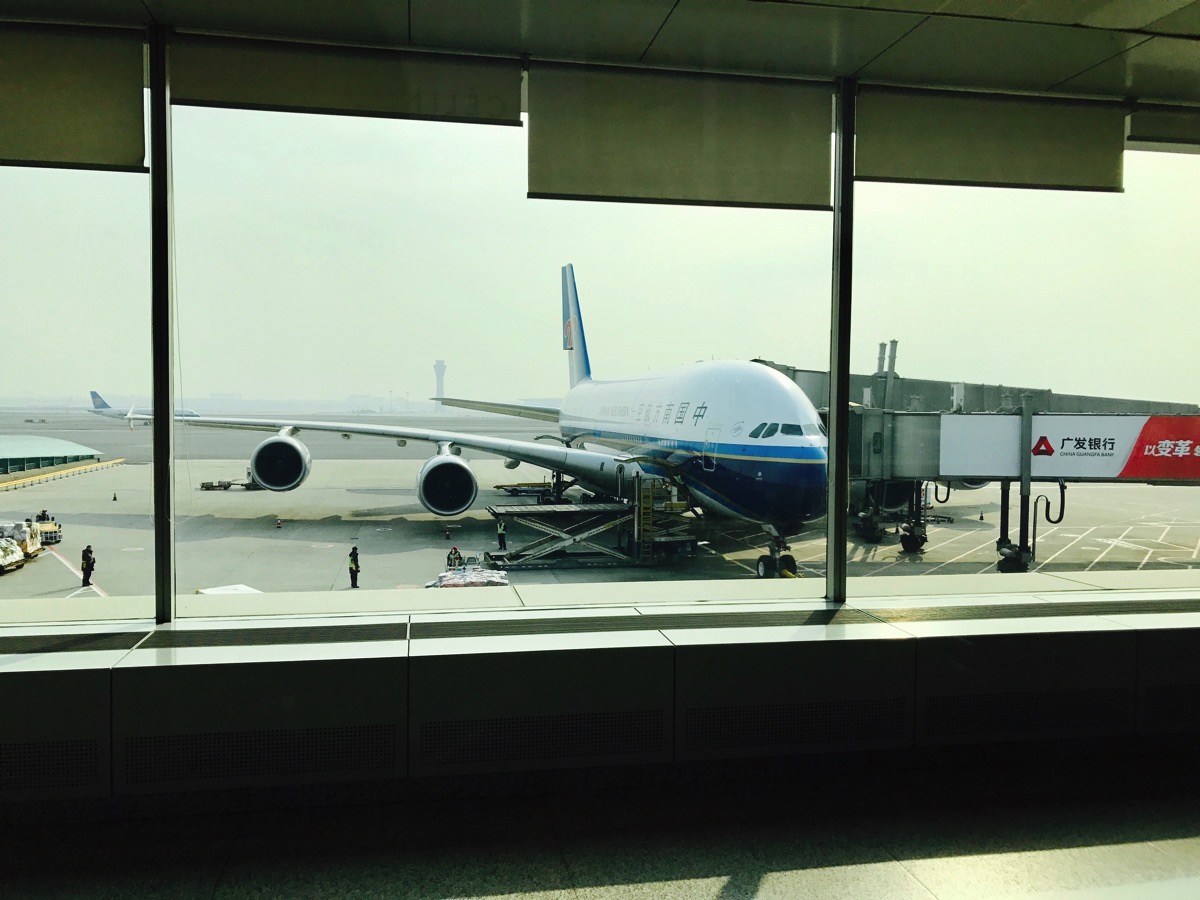 Before I review the China Southern A380 Suite Class, I would like to say that the China Southern’s first class lounge at Beijing airport was pretty disappointing, comparing to any other First and Business class lounge around the globe. Maybe I have not visited enough worse ones, but this CZ lounge is only marginally better than those airport-run lounges in China. If you plan to come to the airport and catch up some work, and expecting a good environment to work, I think Air China Lounge or Shenzhen Airline Lounge is still your best bet in mainland China.

In this post, I will discuss my experiences with the much-anticipated Suite Class product from China Southern’s A380. The total flight time was only two hours and forty-five minutes, though the advertised and padded flight time was three hours and thirty-three minutes. This method has been widely adopted by Chinese Airlines to improve their on-time performance.

The overall design of the hard product is very similar to Singapore’s Suite Class, except it took a simplistic approach (or to save money). One annoying thing is you cannot shut the suite door from inside, so you have to call the flight attendant to close the door, which I found is quite user unfriendly. Otherwise, the seat is very spacious and comfortable, but I think the material and the look and feel of China Southern’s product felt cheap than Singapore Airline’s Suite Class.

I selected the seat 2K, which is the last row of the Suite Class cabin, and the cabin was full for this flight because of the recent minute upgrade. I guess the Economy class had oversold, and then some of Business class passengers got a ‘bump’ to the “deluxe first class” cabin.

One thing (one of the only few things) I like about Chinese Carriers or Asian Carriers, is they provide slippers for premium passengers even on a short two, three-hour flight. I was so shocked when I studied that a flight is less than 9 hours (say Copenhagen to Toronto), AC will not provide any slippers, seriously!

A quilt and a mattress pad have placed on the footrest, and please notice the ugly font on the cover of those two. I think the reason the airline has to emphasize “in-flight only,” it is because some passengers thought this came with this two hour, 7000RMB worth of ‘experience.’ I have also noticed the same writing on Hainan’s quilt earlier too. In contrast, non-Chinese carriers would just use a cheaper plastic wrap.

I think I like the cabin overall for this two-hour flight because how less it costs me. I would never pay 7000 RMB (~1100USD ) for this, though, as no one ever would hopefully.

The in-flight entertainment system did provide a good selection of the movies, so I was able to catch up some films, such as “Allied.”

Before I board this flight, I already knew what I want to order because of the suggestions from a few CZ connoisseurs, The Hot Pot Rice with Preserved Meat (煲仔饭), a Cantonese dish. Shockingly, my preferred food item was not available, BECAUSE THEY ONLY PREPARED ONE, YES JUST ONE, another WTF + OMFG moment besides the no picture allowed BS in the lounge. How can they just prepare only one? So as a result, I opted for the Braised Sea Cucumber whatever bland food instead. The only thing I liked for this entire meal was the chicken soup they offered in a teapot. It was delicious. Other than this soup, everything else did not feel like being in a first-class cabin.

Another Interesting thing about the food was that I have noticed Chinese flight attendants do not have this habit of offering alcoholic beverages to Chinese passengers. So when they asked what I want to drink, and I waited for the FA to finish a list of offerings, of course non-alcoholic. I wondered if there is any liquor offering, then they told me they have champagne. So I pretty much drank an entire small bottle of Taittinger.

Last note, the translation from Chinese to English on China Southern’s food offering was a disaster. I uploaded the menu and saw for yourself. [Noticing how many people are from other food supply company?]

I think the in-flight services was okay. Since I am in the most expensive cabin of this flight and have no language barrier, the crew members were very attentive and accommodating, though you still tell some crew members are more friendly than others. One of the primary reasons why I had not flown China Southern Airline for many years when I had a choice (like I had to fly them once or twice back in 2013 for work, and no other carriers were flying the route I needed). The infamous angry face they typically give to the passengers seating in Economy class for example. I think the training of the crew member for China Southern is still lacking. On this note, I think Hainan or even Air China and Shenzhen are much better.

Overall, I think it was a pleasant journey, and I can take off another Suite Class on my bucket list. Due to the poor ground services of China Southern Airlines as well as weak in-flight dining services, I am confident that I will not purchase any revenue flight tickets from this airline unless they have improved their services in the near feature.
A380 China Southern Airlines CZ PEK-CAN Suite Class
Leave a comment
Views: 160
Share: