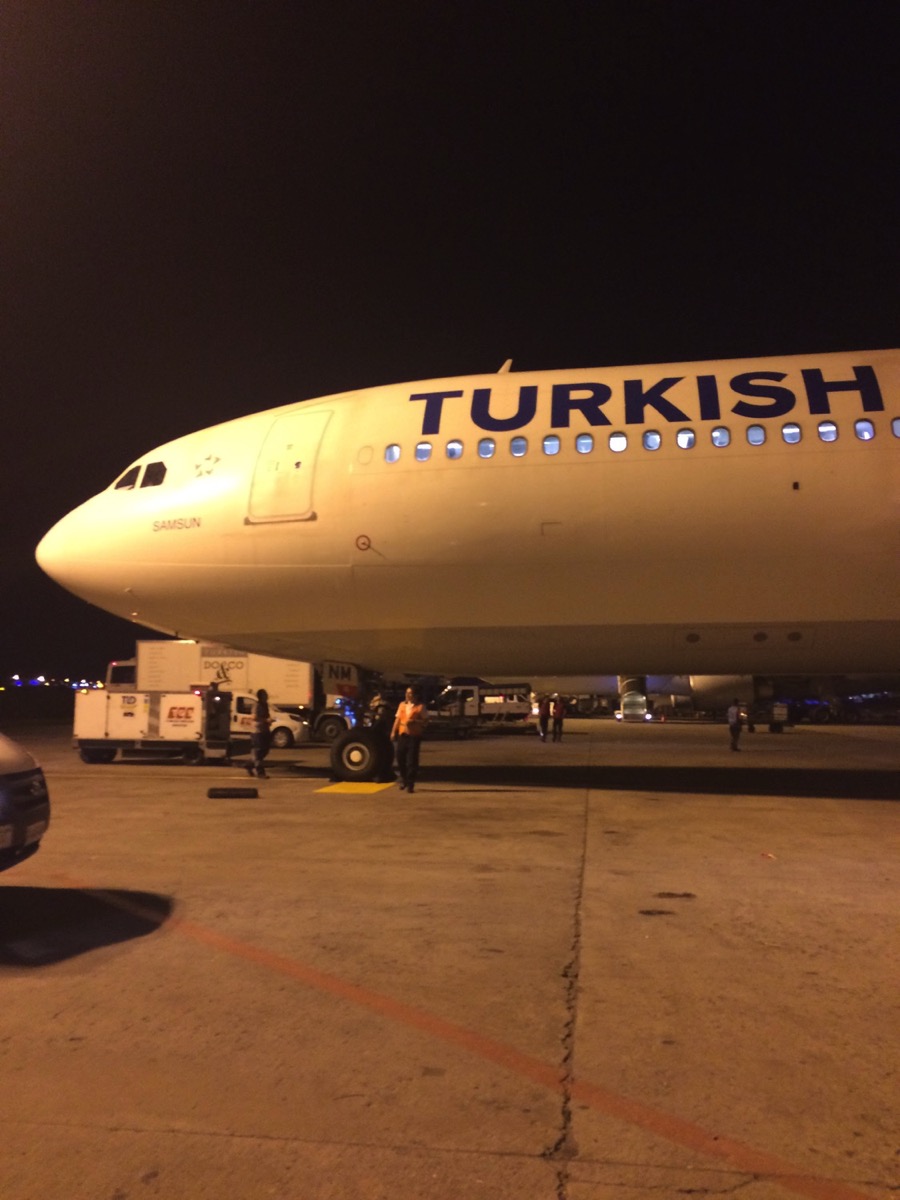 I have flown with Turkish Airline a few times before now, so I was not expecting much from this flight, and this will be the last trip review of my summer 2016 mini-round the world Aeroplan reward ticket because the remaining flights were as following:

So even though this was the last flight review of the mini around the world trip, but this was the most eventful flight for my entire trip or the most special flight/journey even more memorable than when I lost and found my passport back in 2014 in Rio De Janeiro.

To begin with, as the appetizer, after I got off the lovely Singapore A350-900 as I mentioned from the last post, I was heading straight to the lounge at Kuala Lumper Airport. Then I suddenly realized that I would need my passport to go to Turkish Airline’s transfer desk to obtain the valid boarding pass for my next two legs. As I arrived the transfer desk, I forgot to take my passport with me when I deplaned. So I ran back to the gate, and I was pointed to a manager by a few SQ ground staff. I arrived the gate, and one ground staff returned the passport after verified my name and date of birth.

During my layover in KUL, I went to the Plaza Premium Lounge and took a shower there. I was also told that I have to pay to use their printer. I understand the notion of charging passengers for large printing amount of papers, but for one piece of paper, they cost a USD for it. I just cannot understand that. Also, they cheaped out on the strength of the air conditioner, because It felt hot in this lounge.

After I finished the shower, and get my stuff sorted, I headed to the gate directly. Similar to the airports in many other South Asian countries, you need first to enter a gate check for passport, and then you will be rest in the boarding area, and you may not allow to come out again if you do not have a very compelling reason.

The boarding started shortly, it is the usual drill, except every passenger was boarding at the same time. So I just waited outside until very late. It was about 22:00 local time, but since I have not eaten anything in the lounges, I was quite starving at this time. Once we took off and I ordered a lamb which was very tasteful as always. Surprisingly, Turkish Airline also provides mattresses for the Business class passengers now. So now Hainan Airlines, Eva Air along with Turkish airline will provide mattresses, and the flight attendant will prepare your bed. Whereas ANA will provide mattresses in Business class, but you have to DIY it.

I woke up after a few hours later to use the lavatory, and I noticed a Chinese news notification on my mobile phone. Turkish Airline provides free onboard WiFi services for Business class passenger. The news notification says, there is a bomb exploded in Istanbul Atatürk International Airport. At this moment, I wasn’t sure the Chinese translation, Atatürk, is the airport we were going to land, because Istanbul has two airports, one in European side, and another one is in Asia side. The Asia one mainly serves domestic cities, known as Sabiha Gökçen Airport.

At this point, I was scared and stressed out a little bit, and I have no idea what I will do, and where the aeroplane is heading. With probably a million questions in mind, I walked up to the front galley and inquired about what is going on at IST. The flight attendant told me he had no idea, and he would ask pilot about it. After about ten minutes or so, he returned to my seat and said that nothing special has happened!

THEN, THE ON-BOARD WIFI WAS SHUT OFF FOR THE REMAINING OF THE FLIGHT!

I was speechless and felt helpless.

I guess at least it confirms that the airport I was heading, had an explosion somewhere in the terminal.

Once I landed, I noticed that all the aircraft were docked far away from the terminal, and the shuttle bus ferried us to the terminal. It seems nothing was broken from where we entered the terminal, but I can see a lot of litters and some blood patches on the ground. As we walked into the terminal, there were million people stuck in the hallway. The atmosphere was devastating. I asked my FA, and they had no further information to provide, and the one FA offered false information was shamelessly walked pass me.

Fortunately, this is the third or fourth time for me to come to this airport, so I quickly walked over to the transfer desk and then directed to security checkpoint just resumed services. Then I took the elevator to the departure level and headed to toward the infamous CIP lounge. Some airport staff were standing in line and stopped all of the passengers saying that the explosion happened nearby the CIP lounge, so they are still doing “cleaning” work outside of the lounge, so we cannot go there. While some passengers were arguing with those staff, I just turned around and sat down in a bar few feet away from the blockade line. I just need a pint to relax myself a little bit.

About 40 minutes later, the blockage line was cleared, so I settled my bill and walked towards to the lounge, but the lounge was still not open. Luckily, I was the first batch of passengers lining up for the lounge, so we eventually got in after 20 minutes. At this point, the lounge was not fully open, and some of the areas were still closed for “cleaning.”

My original plan for today was, arriving around 5 AM and go to the free Turkish Airline transfer tour for the day, as last time I did sightseeing was during the winter. I was so looking forward to re-visit Istanbul in summer. Without any doubt, everything was cancelled due to the terrorist incident. So I was just sitting in the lounge, and chatting with random travellers and listen to their stories about this event. At the same time, I was trying to reach Aeroplan to see if I need any backup plan for my connecting flight to Bologna at 5 PM. Unfortunately, the Aeroplan hotline was not reachable this whole time. Some of my friends in Canada also tried to call, but no one was able to get through their line like we do not even get placed into a queue. I also contacted my hotel, but again no one picked up. Fortunately, I was able to reach Marriott Rewards Platinum line, and they made sure that if I cannot arrive, Bologna, that night, I will not be penalized for a no-show at the hotel.

From 5 AM till 4 PM, I regularly checked the flight departure information, and luckily my flight was not changed. After spending most dreadful 11 hours of my life, I could finally escape from Turkey. During these hours, my friends in Canada, especially my fellow travel friends and Turkish friends, who have tried their best to help me in accommodation and communications, which brought me a lot of comforts during these stressful hours.

To conclude, I am pretty sure that I will never spend a penny on Turkish Airline, and I would avoid them (which is impossible somehow) for award flights. I will not fly an airline, which is not honest with their passengers. I understand it may bring panic to some people on board, but I still cannot stand the lies I was told.