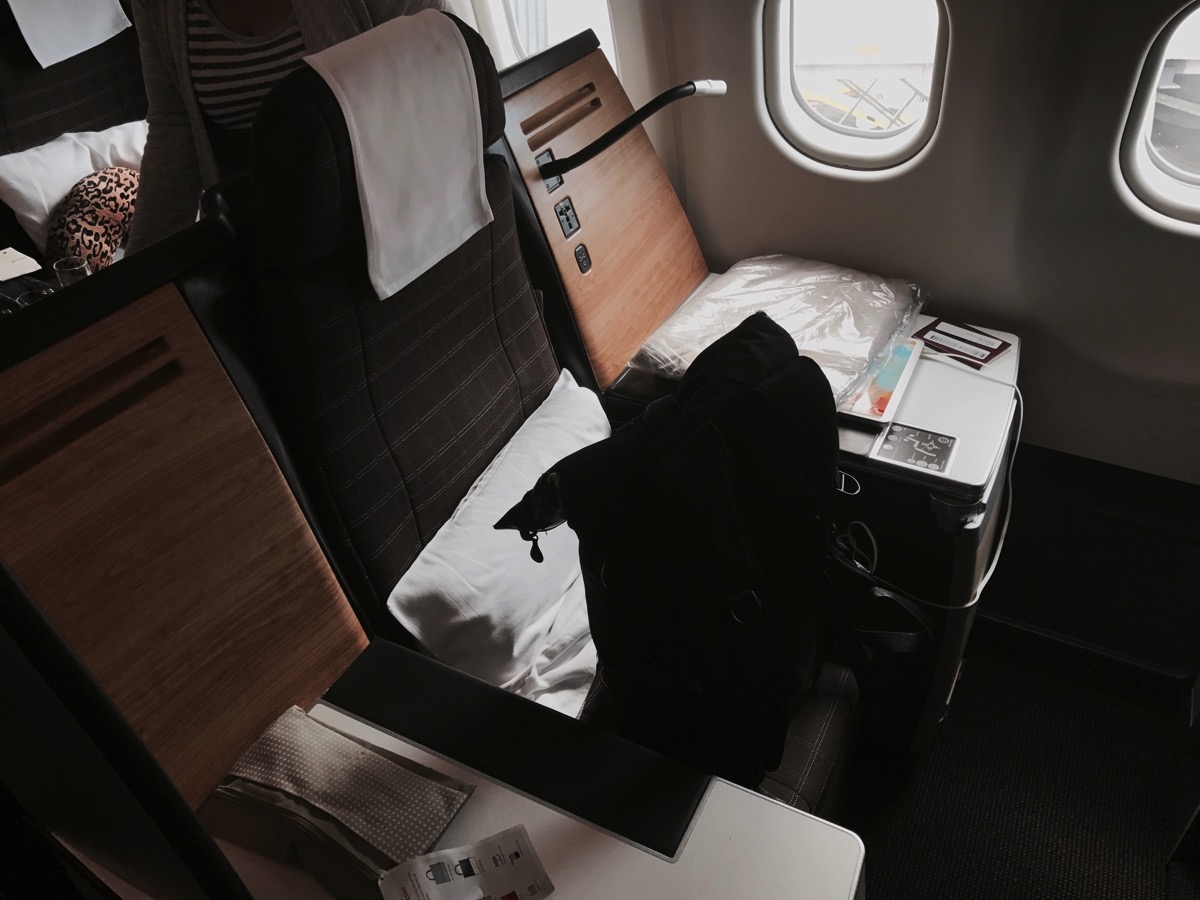 I have finally had the chance to try out Swiss International Airlines Business Class product today (Yeah, I am about to descend to Zurich from Montreal). It has come to my attention that a huge backlog of reviews that needed to be written is still in floating in my brain and I am afraid it is as bad as the delays with Canadian Immigration Department. Hope I will catch them up soon!

This trip was redeemed by using Aeroplan miles, and I paid very minimal taxes along with the miles required. Swiss is one of the very FEW great airlines (along with Eva, I just have to mention it to show my obsession with them) that Aeroplan does not charge you for the scam charges (aka Carrier-Imposed Surcharges). Unfortunately, Swiss does not allow you to redeem Aeroplan miles, or any partner miles for their First Class product, except there, was one time, the First Class award flight ‘showed up’ on Aeroplan’s site, but vanished shortly after.

Before this flight, the expectation of this flight was moderate. While a lot good things have been said about Swiss, and a long time fan of Swiss design ( as a designer), recent reviews on Swiss’s Business Class product and services were very shocking. For example, the service quality was declining, the cabin was getting dated on A333 (my ride), and they are on par with Air Canada. With all these negative comments, I realistically and rationally prepared for this trip.

To begin with this flight, according to Pekflyer Rule No. 1, “if there is a First Class offered in an airline or on your flight, DO NOT TAKE BUSINESS CLASS if expecting impeccable services and experiences.” I promise I did not make that rule up just now; it has been circulating among my friends for a while now. I came up this after my First Class parades from past six months (all on miles of course). Apple used to invite their best employees to some of the most luxuries properties around the world (or only in Hawaii), so they can experience “the best services,” which supposed to inspire them to design better user experiences for their products. I just think that this idea could be better executed if the retreat was arranged in different First Class cabins around the globe.

The flight from Montreal to Zurich is operated on an Airbus 330-200 aircraft, which features some Business Class seats, and 6 First Class seats. One big difference between the First (F) and the Business (J) cabin was the size of the screen. The J cabin screen is tiny, and it is probably the smallest screen in any Business Class I have ever flown to-date. My seat was 4A, the throne seat, which has more than enough but useful surface space, where you can put your laptop on the left side, and your finished food tray on the right. I did notice there is the surface area of my seat has markers and scratches, but it is worth to point out that it is hard to maintain a big white space on a commercial aircraft.

The dinner services happened shortly after reaching the cruise altitude, and salmon was the companion for my tummy. Two glasses of drinkable champagne were consumed and followed by a piece of cake and a shot of Espresso Forte. Before the cabin lights were off, a selection of Swiss chocolates was offered, but I could not try what Forest Gump suggested to try a few more to experience more perspectives of one’s life.

Overall, the dining experience for this flight was average, there is no bad thing to report, and there was no moment of delight. Admittedly, this was my first flight with Swiss, and I cannot directly compare what Air Canada because I have flown their J product too often. Though, I found Swiss Air flight attendants are very friendly, professional and polished compared to average Air Canada crews (some of AC’s service directors are amazing though) in Business Class. I can only imagine how their services would be in First Class. Before take off, I observed the first cabin crews serving the F passengers. I can feel the friendliness and passion from J cabin. Through out the flight, the FA did come around the cabin for a few times, and I kept asking them to fill up my cup with hot water. Since the flight was short, no in-flight snacks were offered as trans-pacific flights. I really liked the breakfast ordering style, so I can personalize my own breakfast.

For the seat, in my own experience and opinion, I prefer Swiss’s product much more than Air Canada’s new International Business Studio. The reason? Due to the size of my body, especially my legs ( I never skip leg day), every time I try to maneuver my body in AC’s new business class seat, my innocent legs would hit different types of metals or woods. It hinders the sleep quality significantly. In contracts, even though I am in the throne seat, which supposes to be smaller than those window single seat (where has additional space due to the fuselage), I found it is comfortable to lie down, and my legs will not get hurt! Another thing I like about the design of Swiss’s J seat is the tray table. While I do not understand why AC has to put their table underneath the monitor and poorly designed the use of space in that J seat, I found the Swiss’s J table is very well designed. It is the right size, interesting to open it up and fold it back.

The last point about this flight is the interior design of the aircraft. The accent wood used in the cabin reminds me the dash panel on a Volvo ( the higher configuration I think ). Although the surface felt dated, it does bring freshness to the cabin. AC’s accent wood may be trendier, but it has no such mental effects. Despite all the negative comments I have read and heard about Swiss, I would recommend its Business Class product to anyone who has no access to its First Class award. Think about it, even if we cannot fly First class for free, it is still much better than the terrifying Lufthansa’s small Business class seat configuration, and we pay no scam charges when redeeming it on Aeroplan!